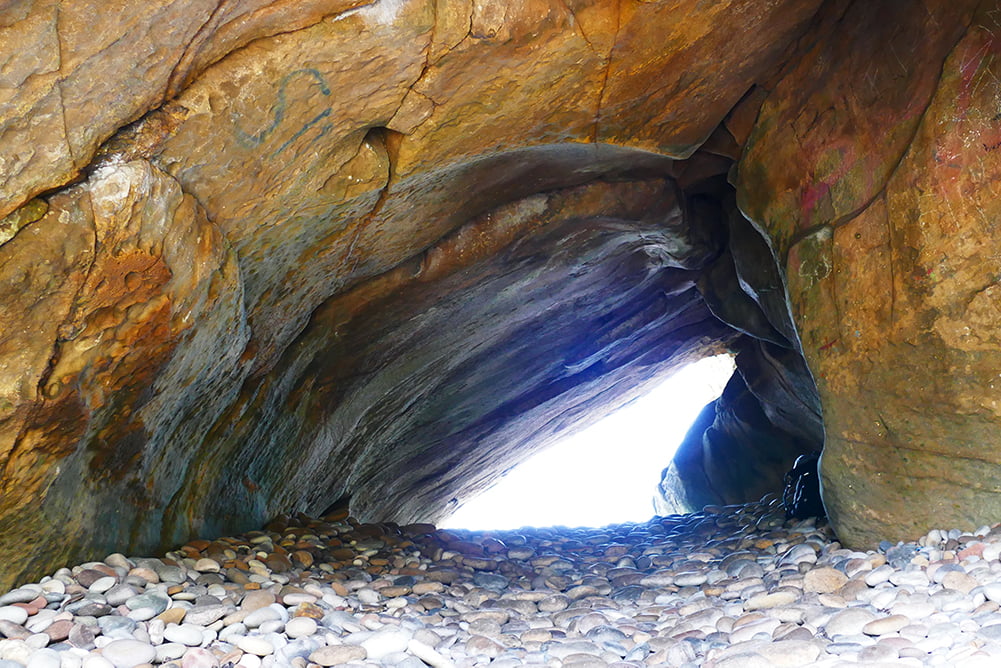 My walk from Hopeman to Clashach Cove, also known as Primrose Bay, was to explore the cliffs and caves. So following the National Trusts advice, I had decided to explore the caves with a responsible adult (my dad) and an extra adult who insisted that they were needed to look after my responsible adult (they wanted to keep an eye on the tide as we are too easily distracted!).

“Grab a torch and jacket (and an adult!), and find a cave to investigate.”

Our journey began at the colourful beach huts on the east beach at Hopeman. We followed the Moray Coastal Trail on a cliff pathway. Yet, I managed to take a wrong turn and we reached a dead end, on a cliff edge. This annoyed of my second responsible adult who suggested in hindsight, I should have taken the other path on the right!

Eventually, we arrive at a stunning little bay with a cave visible on the right and I was suprised to see a sea arch as well. The smell and the darkness of the cave fascinate me. However, the amplified sound of the waves rushed over the stones through the sea archway intrigued me. I left my responsible adults happily sitting and taking in the beauty of the red sandstone cliffs and sunlit waves. I began to record sounds in the sea arch nearby.

I stand on shifting shingle with the deep roar of the waves reverberating around me.

The arch openings are defined by the light, but I am surrounded by darkness.

The loud rumble had a story to tell but in an ancient language now forgotten.

Ignorant of the tone, I wonder, what was the rock trying to say? Was it angry?

I heard sea life sounds seep behind its grumble and I could feel the Earth’s rhythm.

The sturdy rock was as old as time, yet my time seemed fragile and fleeting.

Was I standing at the gateway between rock and sea and still not understanding?

The visit to Clashach Cove inspired my dad to create this image, can the rock see you?